What I am not fond of is baking in the ninety degree heat, while the water is deemed too cold for human life forms. I do not want to get into water unless it is the same temperature as my bath, that would scald the first layer of skin off anyone with nerve endings. I also am not fond of the idea of five hours of having to keep track of my kids in a crowd, make sure they don’t get sucked out by an under tow, and keep shaking forty-six pounds of sand off my towel/blanket/chair because they can’t understand “Please do not traipse all over my towel. Thankyouverymuch.”

What they hear is, “Please go down to the water, emerge your entire body, and then come up to the sand, and roll like a burrito until you’re coated like a piece of shake ‘n’ bake chicken. Then please march over to my towel, and wiggle your entire body until every grain on your body is now on my previously clean laying area.”

Nevertheless, I got dragged to the beach yesterday. And that’s the other thing about family outings lately. Usually they come with a heavy dose of screaming, and yelling, because Paige feigns deaf at every instruction we give her. Either that, or every day is opposite day. “Paige, please do not throw the sand at your sister.” Foof. A big pile of sand will quickly be picked up, and tossed in Allie’s direction, just as she’s about to eat a bite of her sandwich.

And of course, Allie is not my meek-n-mild, sit-back-and-take-it kind of a child. Before we know it, a dirt fight ensues, ensuring enough dirt in everyone’s sandwiches, for us, and every family surrounding us.

I tried to make the best of it. I really did. Of course, getting out of the house is far more trying than it ever used to be too. It’s guaranteed it’s going to take us an hour to pack up to go anywhere, and we’re going to forget at least six items we’re going to have to run back in for from the driveway, or shortly after we leave the driveway. And still, once we get to said place, someone will inevitably utter the words, “Ugh. I meant to bring ___.” Fill in the blank. With anything. Because odds are we’ve forgotten whatever it is you’re filling the blank in with at least once, in one of our outings.

So, we get out of the house. The girls are semi-placated with a movie playing in their DVD players that have become important to my existence.

And even with the DVD’s playing, Paige can’t stop talking.  “Mom!  Why did the chicken cross the road?”

“To get away from Paige?”

“To get to the other side.”

“I have no idea.  Why did the chicken cross the road?”

“To get to the church on the other side, so it could get the eggs from the rabbit.”  And then hysterical laughter.  Not from us, naturally.

We get to the beach, and I have to tell Paige no less than six times to STAY put until I get sunscreen applied and get this shot. She still scooted to the right just after this was snapped, and I wasn’t even entirely sure she had stayed in the shot. “We have to do it AGAIN because you can’t just STAY STILL…..Oh, never mind, I actually got it. I’m not wrestling you again. Be free.”

Me and the girlies

I wandered down to the water to try to take some pictures of them. Naturally, Allie was my poser/do-gooder, and Paige was just here there and everywhere like a spastic, rabid chipmunk. 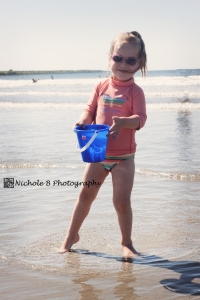 Allie had so much fun playing with the buckets Daddy bought them (6 in total, with no less than four shovels of every shape and size), and was content to sit either just at the water’s edge, or about chest deep into the waves as the barreled into her and dragged her tiny frame to shore. 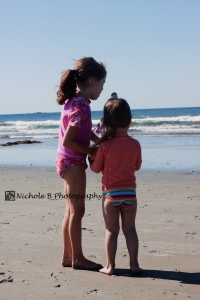 And Paige was really not content unless she was just about over her head and testing her swimming skills and my sanity levels. Paul had taken her out at one point, and I stayed closer to the shore line with Allie. Sorry, Allie. That water is FAR too cold for Mommy to wander too far in. I had a small panic attack when I saw a large wave come at Paige, and crash over her, taking her underwater. I frantically scanned the water surface, watching for her to reappear, and let loose a big breath I hadn’t been aware I was holding, when she came up. Then another wave came over her, and she repeated the same action. Just letting it wash over the top of her. And then I realized it was a game she was playing, holding her breath just before the wave broke, and surfacing only after it had carried her along in it’s current for a moment or two. Great game for Paige. Not so much for Mom.

In the end, we left after about 4 or 5 hours, when I complained that I was far too hot, sick of baking and that the chair was not really comfortable for my back, nor was the bed of shells that seemed to be lodged under my towel, no matter where it laid. Four or five hours was enough, anyhow.

Being the moron I am, I forgot to apply lotion to the backs of my legs. I am literally limping today with the pain. Ever had the backs of your knees burn? No? Well, then, you’re far smarter than I am. I don’t recommend this, unless you’re trying to torture information out of a POW.

“Do you think when I’m 70, and in a nursing home, they’ll be able to save me from myself?” I asked Paul last night, laying in bed.

“Probably not. You’re stubborn. And kind of mean. You should have some real nice bite to you at 70.”

I think I would be insulted…if he didn’t pretty much have me pegged.

The girls are already begging to go back to the beach. I’m not sure I’ll be able to bring myself back in the next four weeks, before school starts back up. But I may be able to take four or five more hours at the beach, knowing in only four short weeks, I’ll be back to the way life should be. With one kid in school for six hours a day.

7 thoughts on “Life’s A Beach”

Countdown to Disney!October 19th, 2015
Waiting on the Big Guy. 🎅Merry Christmas to all and to all a good night. #christmaseve #familytime #waitingonmrclaus #santastophere